It only took 18 characters and a social media firestorm to blow up Baha Nabulsi’s career.

Nabulsi, a real estate professional with eXp Realty, didn’t see the disaster coming. She didn’t even think that much about the three-word post that would ultimately lead to the loss of her job and prompt a storm of online outrage; it took her little thought to draft her joke and even less time to post it.

“Who’s his realtor?” she quipped in a real estate Facebook group shortly after news that basketball icon Kobe Bryant, his teenage daughter, and several other passengers had died in a tragic helicopter crash.

Her callous post sparked an uproar. Within hours, a managing broker from Nabulsi’s office had intervened in the conversation to offer an apology for her employee’s behavior and assure the group that Nabulsi’s actions would be “dealt with.” She was fired shortly after that.

Nabulsi isn’t the first to be fired over a social media faux pas, and she almost certainly won’t be the last. As a reader, her mistake is apparent. Who would make an insensitive joke so soon after a tragedy, let alone in a professional forum, and not think that they would face any consequences?

But even as we brush off her mistake as one that most reasonable people would never make, Nabulsi’s story pushes us to wonder — in a time when 18 characters and an off-color joke can ruin our job prospects, would we be better off avoiding social media entirely?

These statistics are startling enough to make the idea of becoming a digital ghost appealing. After all, your employer can’t discipline you for a poorly-thought-out comment or questionable content if that content doesn’t exist on the web. Shouldn’t shutting down your online profiles be the best way to protect your offline livelihood?

Unfortunately, no. In reality, stepping away from social media might leave you even more vulnerable to employer judgment and online ire. In the ubiquity of the internet, not maintaining a social media presence can come off as odd — or even as a red flag.

I’ll use a fictional example. In the popular Netflix thriller series YOU, the antihero protagonist applies for an apartment and faces suspicion from his prospective landlord when she realizes that he has next to no social media presence.

“I looked you up, you’re not on the socials,” she says, pointedly. “I thought you might be some freak.”

The line is meant as a half-serious joke — both by the landlord, whose tone is curious but mostly ridiculous, and the show’s writers, who frame the line as being darkly ironic given that the protagonist is, in fact, a murderer.

The exchange is fictional, but it represents a genuine modern apprehension for social media ghosts. According to recent research, the majority (57 percent) of employers are less likely to interview a candidate if they cannot find them online. In this way, having a healthy and positive social media presence is a means to reassure others that you are a real person with a strong personal character.

That said, being a social media ghost offers another significant risk. If your online reputation is slim to nonexistent, you could run the risk of being mistaken for someone who shares your name — and none of your values or professionalism.

Take the case of Kendall Jones, lion killer, as an example.

At the peak of her infamy, Kendall Jones was a Texas Tech cheerleader whose love of posting pictures of her African safari hunting trophies sparked widespread controversy and flame wars on the internet. Outrage flooded Jones’ social media channels when she posted a photo of herself grinning beside a dead lion. The Washington Post even gave her the unfortunate superlative of being “the most eminently hateable person on the Internet right now.”

The safari hunter shrugged off the firestorm that her actions sparked, seeming to take the controversy in stride. However, the experience was decidedly less favorable for a student at Texas State University who shared Kendall Jones’ name — and, unfortunately, some of the misdirected hate. The latter Jones faced near-constant harassment and smears on her character; out of frustration, she once tried to respond by tweeting: “For the love of God can you realize that there is more than one Kendall Jones in the world & the one you’re speaking [sic] ISN’T ME?!”

As journalist Libby Copeland writes in an article profiling the non-controversial Kendall Jones, “When online shaming campaigns target real or perceived wrong-doers when activists or controversial figures get trolled or harassed on social media, there is sometimes an additional, unintended target: a person with the same name, who discovers his or her online persona has, in a sense, been hijacked.”

The harassment, in and of itself, is a significant problem. But the longer-term issue that these name-doppelgangers face pertains to their online reputation. To this day, nearly five years after the #LionKiller controversy reached its peak, the first three pages of search results for Kendall Jones centers on stories about Kendall Jones, the lion killer. The misidentified Texas State University student has a few Google entries to her name — but you certainly have to look for them.

Of course, one could argue that the odds of a mistaken identity crisis reaching the scale of Jones’ Twitter-wide #LionKiller controversy are slim. But what about the smaller stakes? What of the doppelgangers who earn DUI court documents, embezzlement accusations, and business malpractice headlines that, through no fault of your own, pull your character into question and place your career into jeopardy?

Yes, it might seem tempting to delete your accounts and remove the risk of employer judgment outright — but the absence will leave you vulnerable to an identity hijacking that you can neither control nor avoid.

The second Kendall Jones might still live out-shouted by her infamous online twin, but by maintaining her accounts and voice online, she still has a chance to point to her online image and say, this is me. This is the person that I’ve worked hard to become, and this is the self that I want those in my personal and professional lives to take seriously. An online ghost has no such means to protect themselves from unfavorable assumptions and misidentifications.

So, reboot your Facebook and resuscitate your Twitter, launch a personal blog, and update your Linkedin resume. Hone in on your social media brand, and set aside some time to ensure that all of your profiles are active and up to date. And, most of all, try not to get into any Twitter wars or affiliate yourself with anything too controversial. The only way to protect yourself from online judgment is to craft an identity that you can be proud of, both on- and offline. 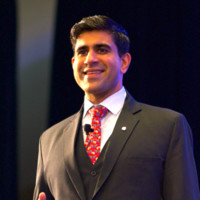 Sameer is well-versed on the nuances of ORM strategy, and has served as an expert witness on matters of Internet defamation. He's a frequent speaker at conferences, on topics such as online reputation management, search engine optimization, relationship capital and ethics. He is the founder and CEO of Blue Ocean Global Technology.