I’ve worked alongside my husband, Todd, since 1997, and believe the principles we’ve developed to thrive during our work day have enriched our marriage. I hope incorporating these practical lessons will cause you to look back on this season and see it as a springboard for a healthier relationship.

1. Determine house rules: Do we work after dinner? Do we talk about work before morning coffee? Do we bring computers and files into the bedroom? Expectations are like pre-meditated resentments, so the more we communicate what is important, the healthier our day goes.

2. Support work flow, by not interrupting each other. Todd and I each have a list that accumulates our thoughts and questions throughout the day. That way we can address them later without distracting each other in the moment.

3. Don’t offer feedback unless asked. It’s easy to want to weigh in on something you overhear, but without knowing the history, the people, or the nuance of the circumstance, your feedback might discourage progress, instead of offering a new perspective.

4. Make a plan the night before so shared responsibilities, like childcare or meal prep, are clear before the day begins.

5. When your partner is angry, recognize anger is a secondary emotion, often sitting on top of fear and frustration. Be a sounding board, ask clarifying questions, listen, and give freedom for them to take a break without judgment. Your response, rather than reaction, to their negative emotion might be the key to turning around their day.

6. Stay interdependent. It can be tempting to be independent, and do our own thing throughout the day. But that requires an abrupt transition when later, in the same space, with the same person, we are supposed to be emotionally and relationally connected. Equally as harmful is co-dependence, where my feelings about the day are tied to yours. Between independent and co-dependent is the much healthier interdependent, which allows for individual responsibilities and agendas, while maintaining the shared goal of communication and concern for the other.

7. Work to keep interactions from being transactional. We are used to having conversations at the office coffee station, or asking a colleague about their plans. In this season of working alongside one another, don’t forget to be relational and supportive: cheer on their progress and be curious about their interests.

8. Practice immediacy. When there is conflict, we are tempted to think we only have two options: fight or reconcile, but in the middle of a busy work day there isn’t always the luxury of time to talk things through. Immediacy is the skill of maintaining the relationship while there are differences, and is actually more important than solving the conflict itself. It’s knowing we might have more to hash out, but in the meantime, we respect each other enough to not jeopardize the relationship or hijack their workday. After a rough day or feeling like there is lingering frustration, be sure to say, “I know we’ve had some hard conversation. You’re more important than whatever that was about. Are we ok?”

9. Look for opportunities to serve one another. That might mean taking a call outside, or getting the other a drink when we are up, or running to the printer for the other. The more pleasant and others-centered we are, the less tense the work environment.

10. Take a break. There is a cost to working in a shared space, but there’s also a benefit. Exploit that benefit by sneaking in some moments to play, eat, be intimate, and all around recreate, in the middle of a busy day, in a busy season, in a time of unknown. When you look back at this, you’ll want to remember how you enjoyed working back-to-back.

We don’t know how long this will last, but just as it’s giving us an opportunity to re-evaluate our exercise habits, spending habits, organization and eating, it could also be the best thing to happen to our relationships, as we create a rhythm in the household we want to wake up in- not only now, but also when this crisis passes. 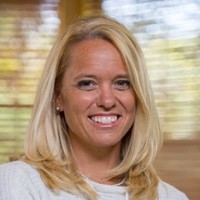 Beth Guckenberger is the Co-Executive Director of Back2Back, the parent company of Trauma Free World. A graduate of Indiana University, she and her family lived internationally for 15 years. Between biological, foster, and adopted children, she and her husband Todd have raised eleven children. Beth is a speaker and author of nine books.