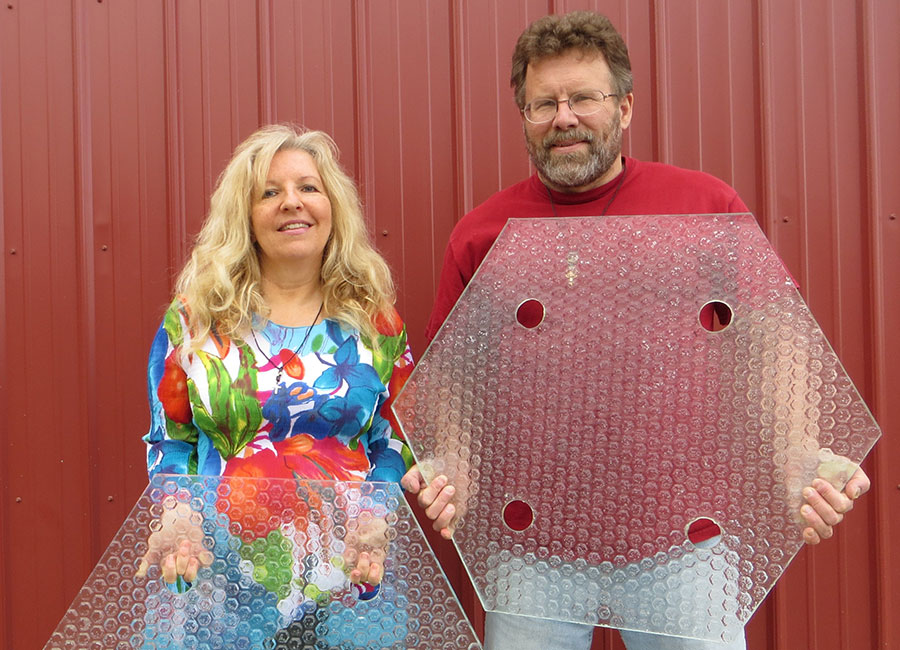 Driving into a parking area with a giant Pepsi logo illuminated beneath you in broad daylight, uninterrupted cell phone coverage while you drive, thanks to “leaky” cables running alongside the road, a highway that generates enough power to charge your electric car, light up road markings at night and feed excess power into a power grid. Welcome to the smart road of the future, made of glass. Scott Brusaw and his wife Julie have been working on the idea of a smart power generating road for 8 years and were thrilled when the US Federal Highway Administration recently expressed an interest in what they were doing and provided them with the funding to move their concept forward.

Their company, Solar Roadways, is now looking at the huge opportunities that exist for roads that pay their way – by creating electricity and reducing maintenance costs with a modular, Lego-like simplicity that could save billions. Like all great ideas, that also happen to be the simplest, the venture is poised to change the way we think and also to inevitably attract a slew of imitators. Brusaw never considered himself an environmentalist, until he watched Al Gore’s An Inconvenient Truth, after whichhe began thinking more deeply about the effects of fossil fuels on the environment.

His wife Julie, a co-founder of Solar Roadways, has always considered him an environmentalist, even though he originally considered environmentalists crazy, with delusional ideas. Ironically, by ignoring the emotive messages and focusing on a solution, he has emerged as a potential giant among conservationists, by cutting greenhouse gases by 75 percent with his invention. Rather than being swayed by emotive arguments around environmental issues that just acknowledged a problem, Brusaw began thinking about how he could help solve the problem. 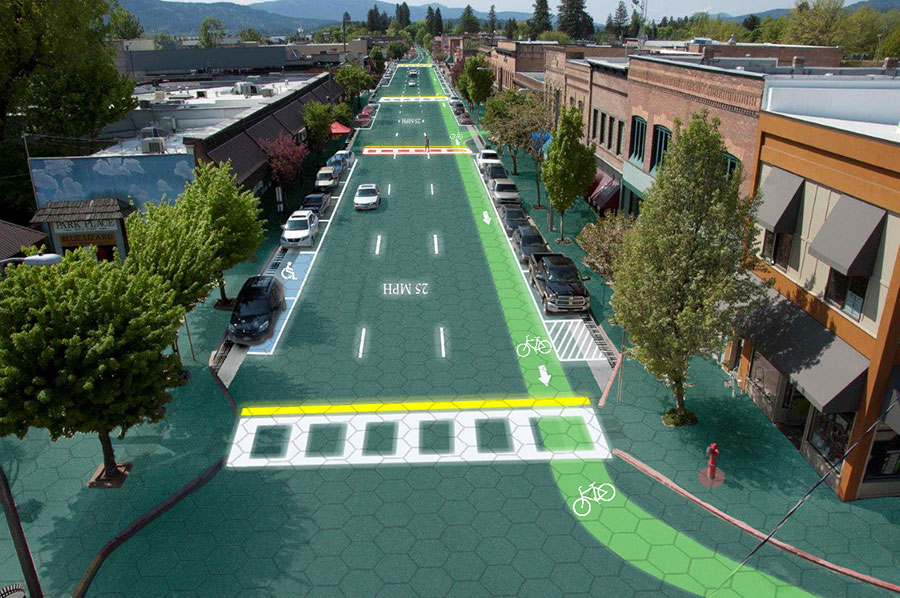 The town of Sandpoint, Idaho has enthusiastically embraced the new technology.

An engineer by trade, it was already in Brusaw nature to find solutions. If global warming was such a big problem, he thought, then why were no solutions being put forward? Amazingly, this was only eight years ago in 2006, and Brusaw hadn’t seen many people stepping forward to meet the challenge. After watching An Inconvenient Truth he began reading up on topics such as climate crisis and realized that the reason nobody was doing anything was because the problem was so huge, so global in nature, that no single institution or individual would be able to fix it.

Brusaw and his wife took a long look at the situation and came up with a seemingly crazy idea – one he might have laughed at himself during his “pre-environmental” days – electric roads. Although still one step below the flying cars you might see on The Jetsons, the husband and wife team have now created a blue ocean strategy that has propelled roadways into a unique economic opportunity. 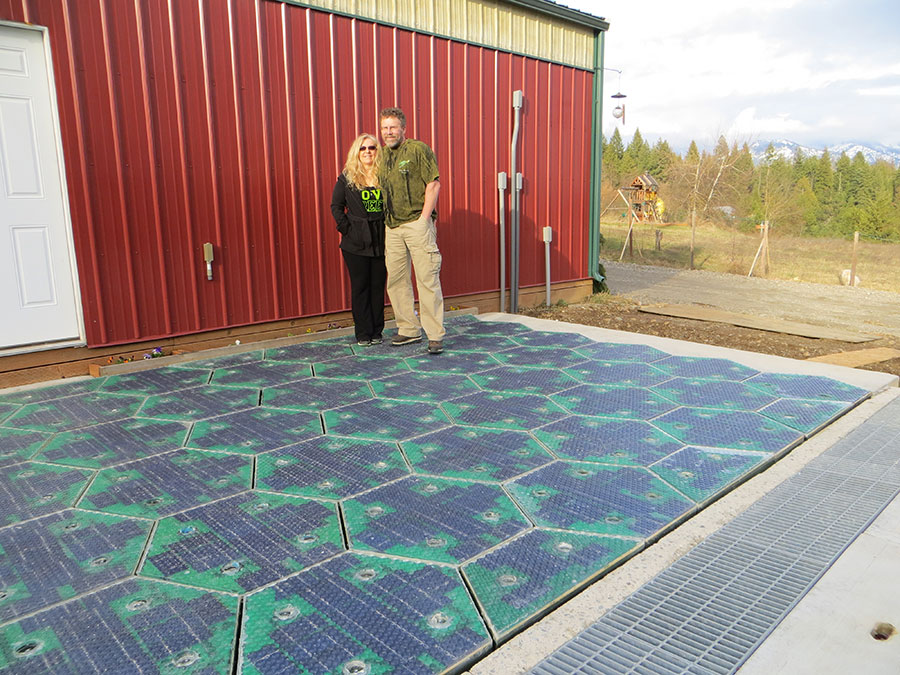 Scott and Julie Brusaw with their modular, glass solar panels.

Dull, black asphalt, the chosen material for road surfaces since the 1870s suddenly has competition from its greener cousin, glass. The new road crews are no longer blackened workers either, who breathe toxic fossil fumes. “An interesting situation now arises,” says Brusaw. “Who will own these roads? Is it an electric company or a local government body?

The reason no one has attempted this before is because it’s such a daunting task that covers so many different fields of expertise,” he says. “We have electrical engineers, civil engineers, structural engineers and mechanical engineers all working together. They’re all working together for the first time and it’s a colossal undertaking.” The risk of a copycat company stealing their idea is great, but Brusaw wants to develop the product into something so advanced that he creates a comfortable distance between Solar Roadways and any future competitor.

Brusaw’s earlier innovations seem to point to an enquiring mind that marries two different technologies to create something new. Previous projects include a technology system in Southern Italy that centralized the readings of water meters and devices that allowed immobilized hospital patients to control television sets without their hands. Brusaw, who will shortly ascertain how much government and commercial support he will enjoy, is currently costing early prototypes of these industrial-strength solar panels.

While bureaucratic processes are slow and steady and need to consider existing infrastructures and urban planning implications, the public interest from ordinary people has been overwhelming and has captured their imaginations. Solar Roadways’ fund raising campaign on popular crowdfunding website indiegogo.com has already raised over $2 million in just two months, more than double the original goal of $1 million. With the catchy phrase “Solar Freakin’ Roadways,” the couple have acknowledged the coolness factor of an idea that inherently feels right to the 47,000 people who have pledged their support on the website.

“The biggest perception we need to overcome is that a solar road is not the same as an asphalt one,” explains Brusaw. Asphalt roads require a power distribution system and road maintenance such as pothole filling, line painting and snow ploughing. Many of these functions would fall away with solar panels. “It’s not the same as rooftop solar either,” adds Brusaw. For a start, the modular glass panels can withstand traffic from the heaviest trucks, at least 250,000 pounds worth. The Solar Road Panels can be installed on roads, parking lots, driveways, sidewalks, bike paths and playgrounds. “Literally any surface under the sun,” quips Brusaw with a grin.

The idea is for the solar panels to pay for themselves, primarily through the generation of electricity, which can power homes and businesses, all connected via driveways and parking lots. The company sees a future where a nationwide system might produce more, clean, renewable energy than a country uses. Heating elements inside the panels allow them to stay snow and ice-free and LEDs light up at night, creating road markings and signage. Electric Vehicles will be able to charge with energy from the sun (instead of fossil fuels) while in parking lots and driveways.

A future plan, after a roadway system is in place, is mutual induction technology – that will allow for charging while driving.  Revenue will not only be generated through the creation of power. Power companies who have examined early installations of Solar Roadways have been overjoyed to discover a cable corridor that follows the road, built into the ground level, modular system. This means no more falling trees or ice taking out overhead power lines. Power, cable and telecoms companies would be able to lease and manage the cable corridors, turning future roads into giant, managed Scalextric tracks.

Early studies in the UK have shown that solar lights spaced 20 feet apart along high accident routes, decreased accidents by 70%. Solar Roadways envisions the entire road, and all its markings, becoming a bright, clear and safe pathway for cars and pedestrians alike. “Keeping the Northern US roads clear of snow in winter, alone, has untold potential for saving lives,” says Brusaw. The small town of Sandpoint in Idaho has embraced the idea of solar panel roads wholeheartedly and is preparing to become the first showpiece of this new technology.

While global licensing is on the cards, the couple can barely keep up with the initial, local demand in the US, with many companies holding off on using asphalt in their build, hopeful that the Brusaws’ will get their product to market sooner rather than later. “We worry about Climate Change. We keep hearing reports that it’s happening faster than expected and can help by easing and then eliminating our dependence on fossil fuels, says Brusaw.

“We began our project with the goal of helping with environmental issues and then realized our concept could help the world in so many other ways too.” Ultimately, The implementation of these innovative ideas on a grand scale from Team Brusaw has the potential to create thousands of jobs in the US and around the world. Who knows, replacing the world’s roads might even allow us to all manufacture our way out of our ongoing economic crisis. One glass panel at a time. 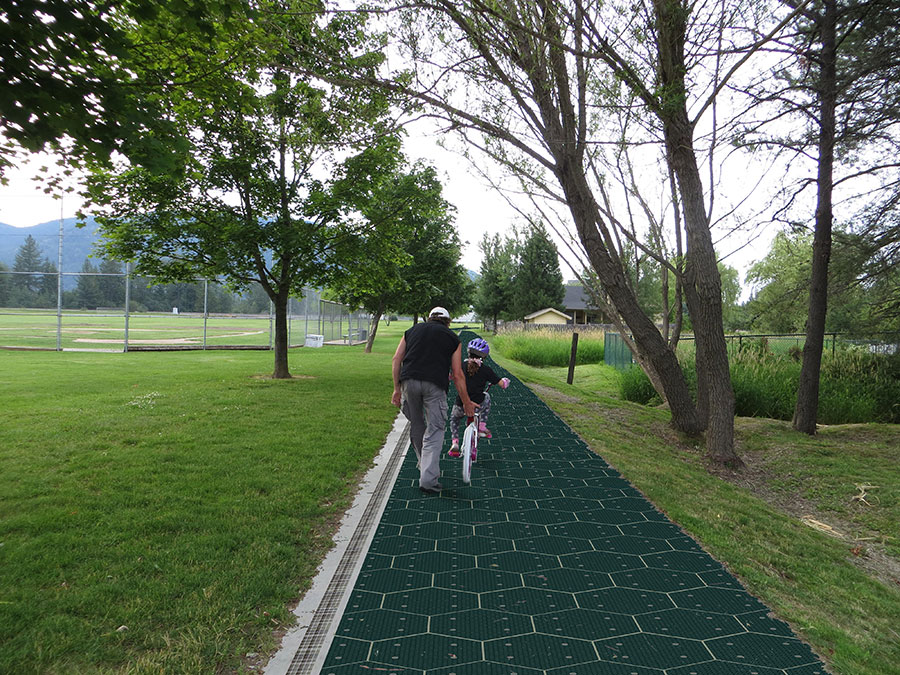 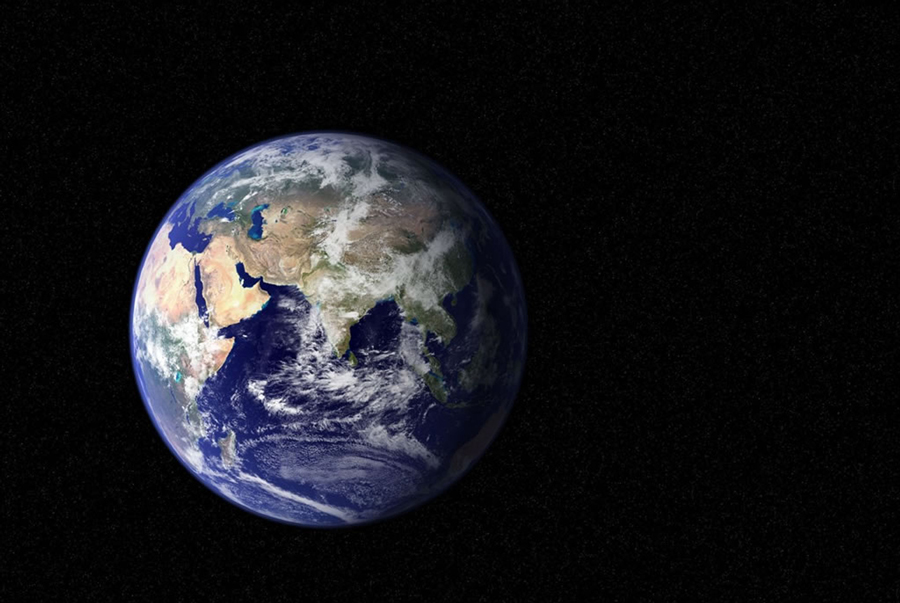 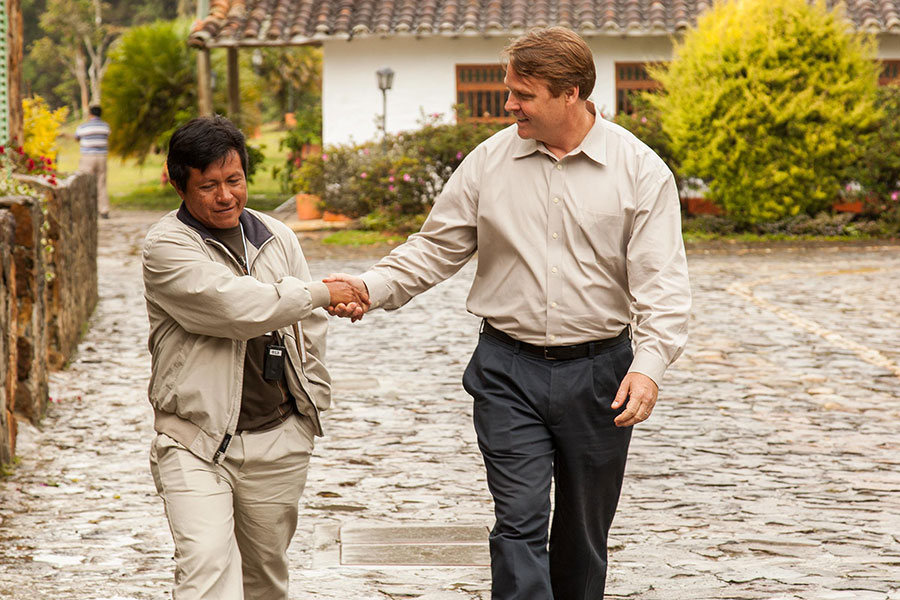 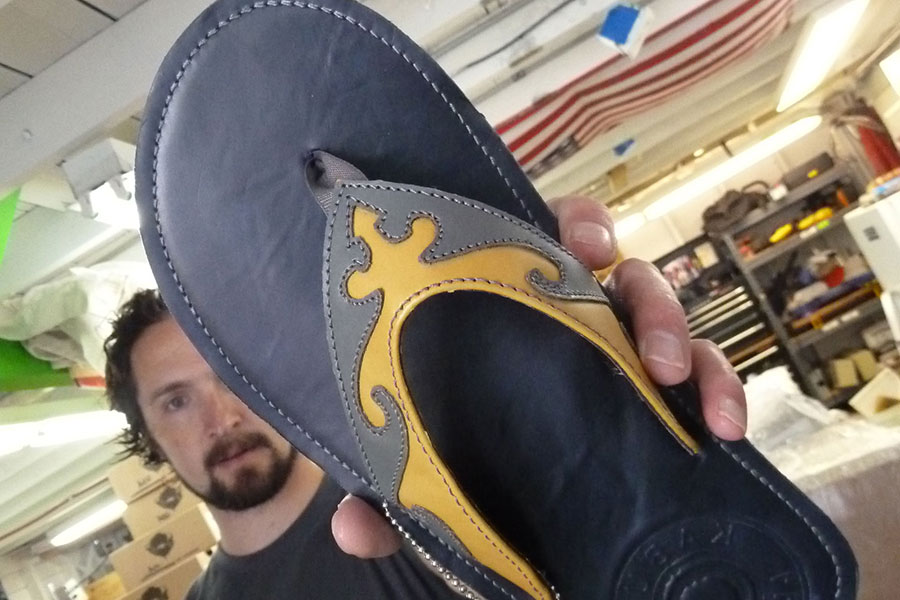 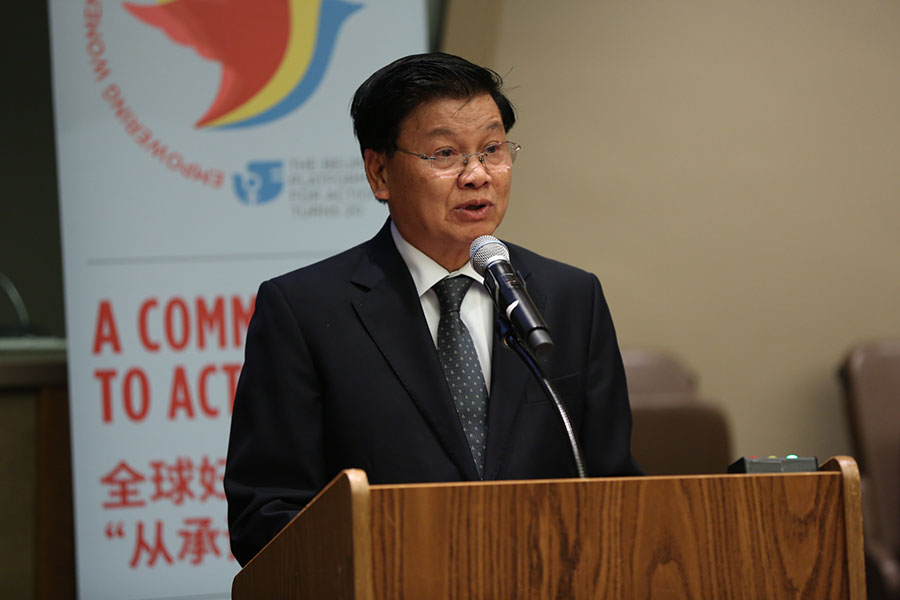