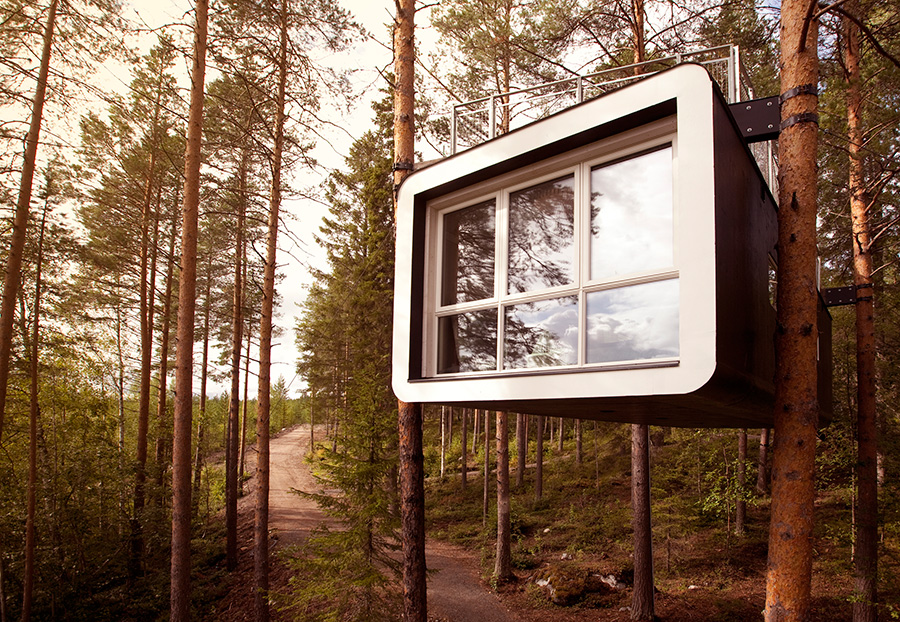 You’re in a forest. Through the trees up ahead a dim orange glow tells you it’s almost dawn. Except, the sun is rising in the opposite direction. You move closer to have a look. A shiny, metallic flying saucer is wedged between some pines about 20 ft. off the ground. With horror you watch as a trapdoor at the base opens and a retractable staircase unfolds to the ground. Something is coming out. “God morgon!” Shouts a familiar figure, still in his pajamas, holding a cup of coffee and straightening his back after a good night’s rest. It’s Kent Lindvall, the originator of one of the world’s most unique weekend getaways.

Not satisfied to start just any old B&B, Kent and his wife Britta decided that some fun, mixed with luxury and breathtaking views of nature was the way to go and have created a series of themed tree houses that are delighting discerning guests from around the world. Situated 630 miles north of Stockholm near the village of Harads, population 600, you’ll find Treehotel.

The idea began seven years ago when a joint friend of the couple, Jonas Selberg Augustsen, made a documentary film in the area called The Tree Lover. Part of the documentary involved building a simple tree house to illustrate the philosophical meaning of what a tree stands for. The tree house stood empty after filming and the couple, who already ran a guesthouse nearby, asked if they could start renting it out. After a couple of years they realized that everyone who stayed in it had a really good experience – high off the ground, great views, nature at its best and a nostalgic connection to their childhood.

However, while guests were enthralled, Kent found it tough going. “We had to drive five miles every day to serve breakfast, 40 feet up a tree, it was hard work for a single tree house.” They decided to build their our own tree houses closer to the guest house. A chance meeting with three well-known architects on a fishing trip to Russia in 2008 saw all three joining the project. With nothing more than an idea and their personal motto: “It’s going to work out, do it!” the couple bought some land and got to work. Britta had 20 years experience in the nursing and healthcare industry and Kent was a former educator and part-time fireman. 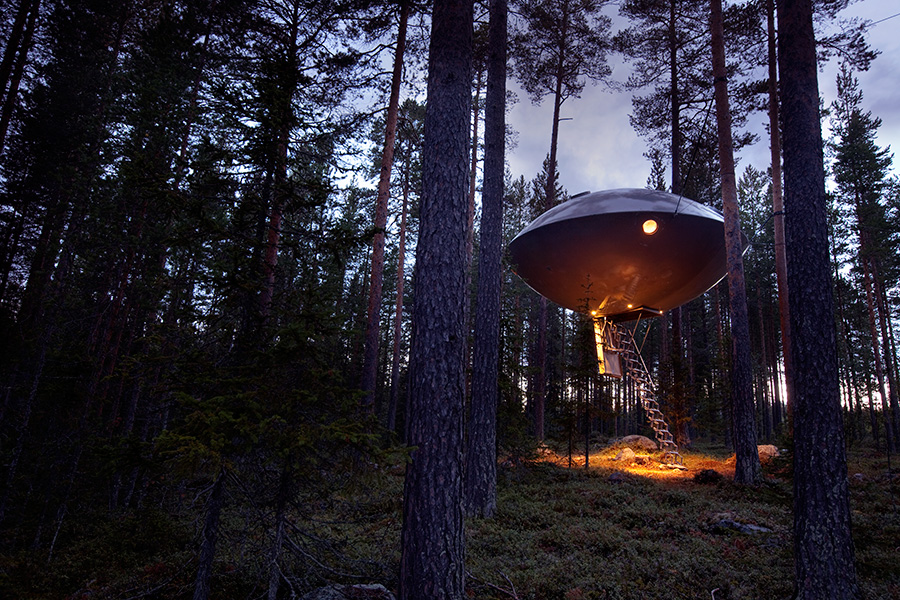 Britta was big on design from the outset and insisted that the tree houses not resemble anything seen before. Each architect was given the freedom to create their dream tree house, resulting in the unique designs now floating among the Swedish pines, with spectacular views over the Lule River.

Some of Scandinavia’s leading architects became involved and now a total of five rooms, each with its own theme, are suspended up in the air. A sense of fun and playfulness prevails in the design. You’ll find The Mirrorcube covered with reflective glass measuring exactly 4x4x4 meters, The UFO, complete with underbelly landing light and The Cabin, offering a giant flatscreen-like window onto the surrounding forest. Northern Sweden, while beautiful, is known for its harsh winter. Has this put discerning guests off from trekking into the middle of nowhere and climbing a tree? “Not at all,” says Kent.

“We’ve made sure the tree houses have toilets, a heating system and quality furnishings, all the comforts you’d expect from a luxury establishment. Some guests come and stay when it’s minus 35 degrees so we’ve had to install triple glazing on the windows. In fact, winter is high season for our guests from abroad, who love the extreme experience.” Situated 200-400 ft. apart, neighboring guests have their privacy and can also order in when the snow gets too deep outside. In fact, for those guests who want a regressive “back to the nest” experience, Kent and Britta have created just that: a gigantic bird’s nest made from hundreds of sticks, completely camouflaging you from your surroundings. Inside, of course, is a spacious wood paneled environment where a family with two children can comfortably spread out.

While most hotels are graded with stars according to their quality, Kent chooses to define luxury as something beyond the norm. “We’re not luxury in the traditional sense of a luxury hotel,” he explains,  “It’s more about a new kind of luxury experience. To be in nature, high up in the trees surrounded by peace and quiet in beautifully well-designed rooms – it’s a luxury experience that people take away with them.” While the couple complied with strict eco friendly guidelines for the construction, the irony is that no trees were cut down to clear the land or to be used for building. In fact, the trees in their original glory are crucial to the whole concept of a tree house.

Tree Hotel took less than one year to get off the ground, helped along by a local community, government and finance institution that recognized the value of what the couple wanted to achieve. “It was rather easy,” says Kent, “because our community was really positive and found a solution together with us. The bank was interested in our project and government departments pushed the zoning regulations through.”

Already, 70 percent of guests come from all over the world, most of them never having been to Sweden before. The village of Harads has now become the main reason an American or Australian tourist might discover Sweden, adding to the broader tourism industry. “Most guests are interested in nature and sustainable accommodation,” explains Kent.

“Britta and myself wanted to build a sustainable hotel among living trees.  We don’t touch or interfere with nature. Untouched nature and quietness is what most of our guests are looking for. We hope our guests appreciate our sustainability work, even if it does make their accommodation a bit simpler. While we want to have our hotel in the middle of nature, we want to do it on nature’s terms,” he asserts.

The couple want to build their ideas elsewhere and are currently in discussions with other countries. Franchising the trees, now there’s a new concept: coming to a tree near you. 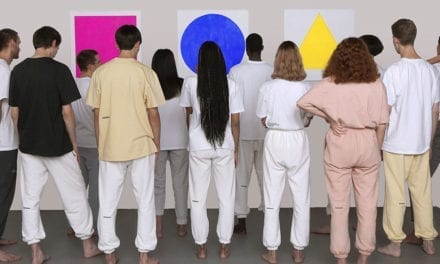 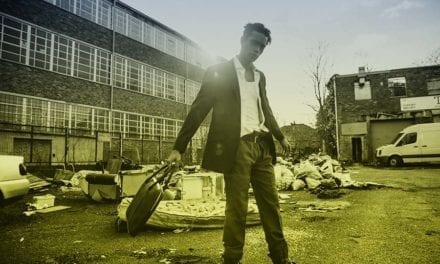 Ending Animal Slaughter One Fashion Bag at a Time 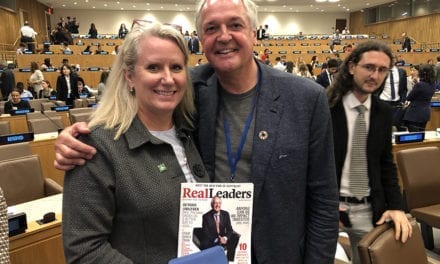